In honor of Independence Day 2014, I’m making my annual vexillological display to honor the birth of the United States. 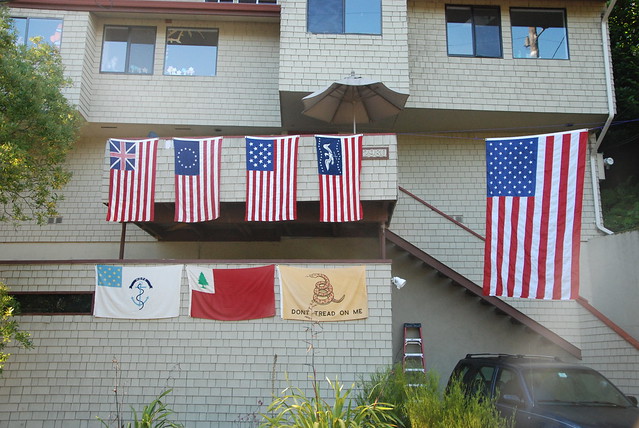 The flags displayed are as follows:

This flag, also known as the Continental Colors, was first hoisted on the Alfred, in Philadelphia on December 2, 1775, by Lt. John Paul Jones. This flag was also used by American Continental forces as both naval ensign and garrison flag through 1776 and early 1777. It served as a national flag until the adoption of the first version of the Stars and Stripes on June 14, 1777. This flag has been in my collection since the 1980s.

On June 14, 1777, the Continental Congress adopted a resolution stating, “Resolved, that the flag of the United States be thirteen stripes, alternate red and white; that the union be thirteen stars, white in a blue field representing a new constellation.” The oft repeated story that Betsy Ross, a Philadelphia seamstress, designed and made the first flag of this pattern have never been verified, nor have the claims to that honor for Francis Hopkinson, a well known political leader from New Jersey. This flag (and several variants of it, including the Grand Union, below) served as the flag of the United States from June 14, 1777 to May 1, 1795. This flag has been in my collection since the 1980s.

This is the flag that was flying over Ft. McHenry when Francis Scott Key penned his famous poem, now our national anthem. When the first two states after the original thirteen were added to our nation, the flag was modified to add both a star and a stripe for each state, bringing the total to fifteen stars and fifteen stripes. When five additional states were added in 1818, it was decided to reduce the number of striped back to thirteen to honor the original states, and add a star for each new state. The Star Spangled Banner served as the flag of the United States from May 1, 1795 to July 3, 1818. I purchased this flag at Ft. McHenry in Baltimore in the late 1990s.

This flag was carried by Gen. John C. Fremont on his wide-spread expeditions in the western United States in the 1840s. As the United States flag was not normally carried by units of the Army during this period, the Fremont Flag was especially prepared for his expeditions. This flag has been in my collection since the 1980s.

The Flag of the United States

This flag dates from the Revolutionary War and was carried at the Battle of Bunker Hill. It is a form of the Red Ensign, which was flown on ships of the period. Replacing the Union Jack in the canton of the flag is a green New England Pine tree. The Bunker Hill Flag is a variant on this same theme. This flag has been in my collection since the 1980s.

This flag was used as the Captain’s personal flag on ships of the Continental Navy. It is based on a common symbol of the cause of the American revolution, the rattlesnake, and includes the words, “Don’t Tread on Me.” The Gadsen flag was different from the other flags of this theme in that the rattlesnake is featured coiled, rather than crawling. The Continental Navy Jack, also known as the First Navy Jack, was used by the Continental Navy and is currently used as the jack on all United States war ships. This flag has been in my collection since the 1980s.

Historical information gleaned from the book Flags of American History by David D. Crouthers, published in 1978 by Hammond Incorporated.