I’ve been to several NASASocial and NASATweetup events, but this is the first that I wasn’t allowed to take pictures for a majority of one of the days of the event. When the purpose of these events is to publicize NASA and, in this case, the QM2 rocket test for the Space Launch System (SLS), would I not be allowed to take pictures?

The answer is because we spent the first day touring  a rocket factory. Apparently rocket manufacturing is something that the government considers fairly sensitive, so they don’t like pictures. I understand, but it was a little odd to not be able to photograph and even tweet from some places on the tour. Because they build rockets at the Orbital/ATK facility in Promontory that we toured, our bags were checked to see if we had any spark producing materials in our bag…

Touring the rocket factory site was amazing. This is the site where the Solid Rocket boosters were manufactured for the Space Shuttle program. It was really interesting to learn how these solid fueled rocket motors are built. How do they transport the segments to Florida for launch? By rail, naturally! the rocket factory is about 9 miles from the location where the transcontinental railroad was completed in 1869.

For my precious few pictures of the Rocket factory tour, please see the Flickr album.

Day two of the NASASocial was the main event, the actual test of the QM2 rocket. Our viewing site was about 1.3 miles away from the booster, with an unobstructed view. 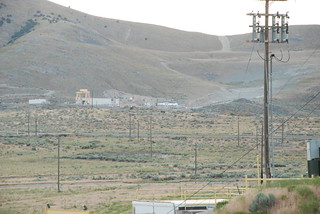 I’ve seen two rocket launches before. I watched STS-131 launch from Pad 39A at the Kennedy Space Center. I saw Landsat 8 launch from SLC3 at Vandenberg Air Force Base. In both those cases, the rocket sped away from me at a great and ever increasing speed, trying to achieve orbit. In this case, the rocket was bolted to the ground, and all of us in attendance got to experience the full three minutes of thrust and it was amazing. 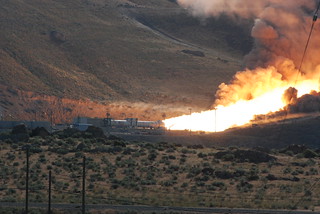 After the rocket ignited it took a full 6 seconds for the sound to reach us at the viewing location. It wasn’t just a sound that I hear with my ears, it was a full body experience. I felt the rumble for the full three minutes of the test. After the test, they took to the test stand and we got up close and personal with the rocket! 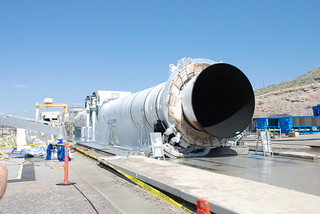 For my full set of pictures of the test and visit to the rocket afterwards, please see the Flickr album.

I really want to thank NASA and Orbital/ATK for the tour and letting us view the test. If you ever have the desire to learn about space, I strongly suggest applying for a NASASocial event. You will get up close and personal with the scientists, engineers, and others that make our space program work. Visit the NASASocial web page for more information and to sign up!